In 2019, the Blue Hill Public Library announced a new staff position, the Ruth Slaven Teen Services and Outreach Librarian, made possible by a generous gift to the library’s endowment by the Anahata Foundation. But who was Ruth Slaven and why is this position named in her honor? 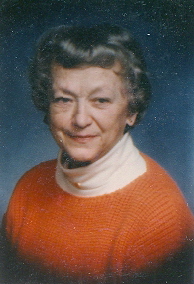 Ruth “Rudy” Slaven was a former BHPL staff member and mother of Capt. Robert Slaven of Blue Hill. Rudy was born in Blue Hill in 1918 and lived in Europe and Asia while married to Major Robert Knowles Slaven. While in Tokyo she taught English to Japanese school children, and while in West Germany she was president of the PTA of a large school system. After retiring, they returned to Blue Hill where Rudy became immersed in many roles in the community, including Girl Scout leader, librarian at the Blue Hill Public Library, president of the Blue Hill Garden Club, president of the Blue Hill Society for Aid to Children, and singing with the Bagaduce Chorale. In addition to raising and caring for her own children and pets, Rudy cared deeply for child and animal causes in general.

The library is pleased to honor Rudy’s legacy through serving young people in our community.