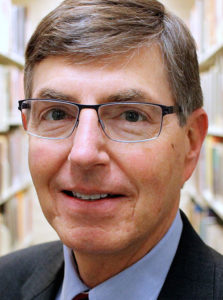 John Diamond and his wife Marcia moved to Blue Hill in 2016. Though John is a native of Bangor, he and his family were drawn to the Blue Hill Peninsula and visited often. Life took them away from Maine for a few years, but upon their return settled on Blue Hill as their home and have since designated the town their “final resting place.” John joined the library board in 2020 and serves as secretary of the board of directors, addition to being chair of the strategic planning committee and a member of the finance committee. John’s wife Marcia is the head of the Bay School in Blue Hill and they have three children and four grandchildren.

John is currently the president and CEO of the University of Maine Alumni Association though he began his career as a journalist and legislative staffer. At age 25, he was elected to the Maine House of Representatives and served for eight years, including four years as the House Majority Leader. After, he taught journalism at the University of Maine and worked as a documentary producer and media critic for Maine Public Television. He later served as a senior administrator for universities in Maine, Arkansas, and Wisconsin. In 2015, John published PLEASE DELETE: How Leadership Hubris Ignited a Scandal and Tarnished a University. The book details the masking of financial mismanagement within the University of Arkansas’s fundraising division and the high-profile scandal that ensued, and achieved Amazon’s “#1 Best Seller” designation in its category.

John has been heavily involved in a number of civic and community organizations throughout his life. He has served on the boards of the Bangor Region Chamber of Commerce, the American Folk Festival, the United Way of Eastern Maine, and the Maine Compact for Higher Education. Off hours, his passions include baseball, libraries, music, and the Blue Hill Peninsula. — By David McDonald