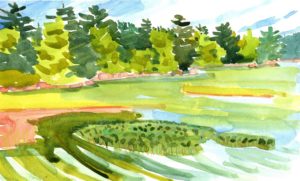 The Blue Hill Public Library will host a 2D/3D exhibition, Painter/Potter by Sedgwick painter Leslie Anderson and Surry potter Vivian Pyle in the Howard Room Glass Cases during the month of September, where they will explore common threads in their work by pairing paintings with ceramic pieces. The public is invited to an opening reception on Friday, September 2 from 4:00 to 6:00 PM.

Sedgwick painter Leslie Anderson and Surry potter Vivian Pyle met several years ago at the Blue Hill Farmers Market where Vivian displays her pottery and Leslie sells her husband Dan’s cut flowers and her own line of notecards, calendars and small paintings. They became friends and eventually began collecting each other’s work.

Over time, they began seeing similarities in the designs, color combinations, and whimsy each utilizes in creating their works. Both are drawn to vibrant color and organic texture and both are inspired by the nature that surrounds them on the Blue Hill Peninsula. And both artists came to their vocations later in life after demanding careers—Pyle’s in academia and Anderson’s in high tech.

Pyle’s passion for ceramics began while she was teaching Russian at Colby College, and continued under the tutelage of Marlene Jack at the College of William and Mary in Virginia. Her influences range from Chinese prehistoric pots to European 19th-century porcelain to mid-20th-century ceramic design and the work of contemporary American ceramic artists.

Known for her colorful watercolors and oil paintings, Anderson has studied with a pantheon of Maine painters including Jon Imber, Tina Ingraham, Colin Page, and Philip Frey. Her influences include John Singer Sargent, Winslow Homer, Lois Dodd, and George Bellows, all painters with ties to Maine.

The show is available for viewing during library hours, subject to the Howard Room meeting schedule, which can be viewed at www.bhpl.net. For more information call the library at 374-5515. 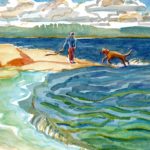 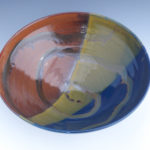 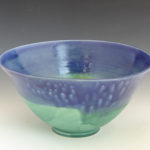 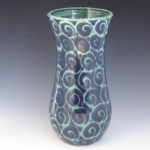 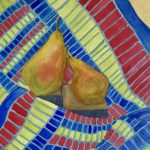 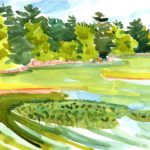