Leslie Ross, bassoon maker, musician, composer and sound artist, will showcase the processes of both bassoon making and of creating sound installations in a special exhibit at the Blue Hill Public Library throughout November and December. The five case exhibition in the Howard Room’s glass cases will depict each stage of the creation process — 1) measuring, planning and tool making; 2) preparation and first steps in working wood and metal; 3) stages of finished and near-finished instruments; 4) bocals (the S-shaped tapered metal tube that connects the reed to the instrument), reeds, reed-making and the tuning process; 5) explorations of sound beyond the constraints of a bassoon—and even of other conventional instruments.

Leslie Ross’s interest in instrument building began in 9th grade on the day she was allowed to bring her bassoon home for the first time. She promptly disassembled it, and had to take the next day off from school to put it back together. Early in her life, her explorations as musician and maker were connected to the early music movement, which, still in its formative stages in the late 70’s, advocated not just returning to early period treatises but to rediscovering period instruments–using the early instruments themselves (as compared to modern instruments) to teach and inform us how to play and interpret music of the time.

While still involved in early music and with the same spirit of exploration, Leslie immersed herself in the free improv scene of downtown NYC in the mid 80’s. Accompanying her shift to experimental music, her love of working with materials and building instruments opened up into explorations of invented instruments and sound installations.

On Thursday, December 2 at 7 pm, Hawk Henries, a member of the Chaubunagungamaug band of Nipmuck who has been composing original flute music and building flutes using only hand tools and fire for over 25 years, will join Leslie Ross in a conversation about instrument making, inspirations, and learning from the past. The event will be hybrid– in person and on zoom– and participants can register using the calendar at www.bhpl.net or calling the library at 374-5515. The exhibit will be available for viewing during library hours in the Howard Room, subject to the meeting room schedule through December 30. 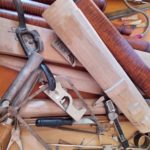 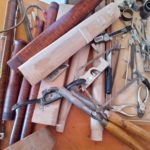